Epidermal hepcidin is required for neutrophil response to bacterial infection

Epidermal hepcidin is required for neutrophil response to bacterial infection

Novel approaches for adjunctive therapy are urgently needed for complicated infections and patients with compromised immunity. Necrotizing fasciitis (NF) is a destructive skin and soft tissue infection. Despite treatment with systemic antibiotics and radical debridement of necrotic tissue, lethality remains high. The key iron regulatory hormone hepcidin was originally identified as a cationic antimicrobial peptide (AMP), but its putative expression and role in the skin, a major site of AMP production, have never been investigated. We report here that hepcidin production is induced in the skin of patients with group A Streptococcus (GAS) NF. In a GAS-induced NF model, mice lacking hepcidin in keratinocytes failed to restrict systemic spread of infection from an initial tissue focus. Unexpectedly, this effect was due to its ability to promote production of the CXCL1 chemokine by keratinocytes, resulting in neutrophil recruitment. Unlike CXCL1, hepcidin is resistant to degradation by major GAS proteases and could therefore serve as a reservoir to maintain steady-state levels of CXCL1 in infected tissue. Finally, injection of synthetic hepcidin at the site of infection can limit or completely prevent systemic spread of GAS infection, suggesting that hepcidin agonists could have a therapeutic role in NF. 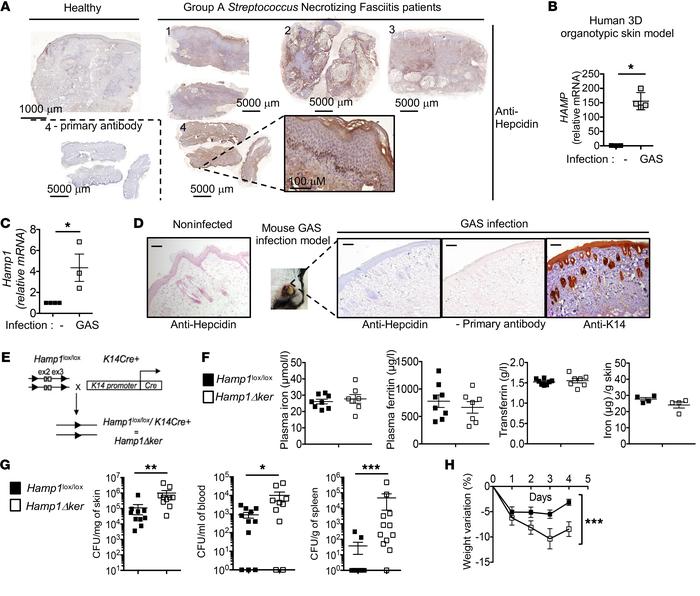